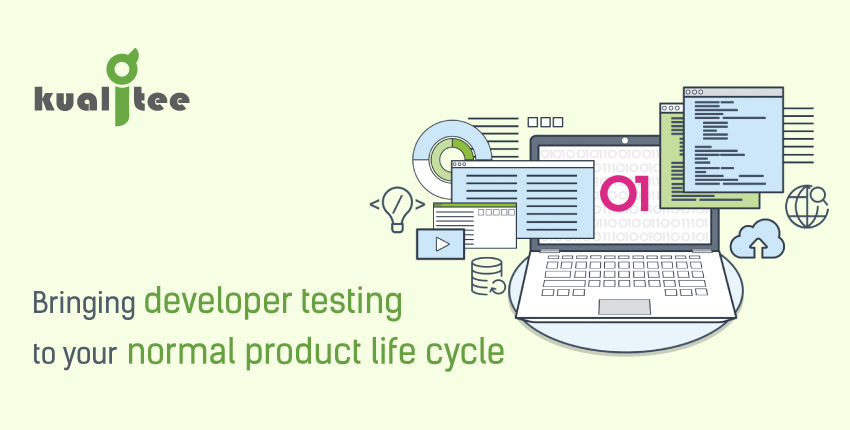 With time, Agile and DevOps development models are making more sense. These software development models claim to make a timely product delivery under a cost-effective budget that can now be justified with “Developer Testing”- as just another reason.

Developer testing is not any hot topic, but rather signifies the need for software testing at every test level demands its spirited revival.

Developer testing requires developers to follow a motto, i.e., “Never leave a bug unattended to be caught and fixed later after the issue grows bigger.” Even having a thought like this is disastrous!

Developer testing should never be compromised because if a developer is taking care of QA for every unit code, there will be lesser chances of bugs to pop out. Producing too many bugs will later waste tester’s time on reporting those bugs and the developer will be the only person responsible for any delays in the product release.

One of the developers’ duty is to maintain a threshold for bug production. If the threshold crosses the limit, then it’s only the developer to answer at the end. That threshold can’t be the same, it varies from project to project.

So, when we are working and following the Agile workflow, it is the team’s responsibility to assure the product quality –  not just the tester’s.

It’s not as hard as it may seem, but sneaking through every code you write or any new feature you create can be very practical for the next testing steps. Here’s how:

Most of the time, developer testing requires developers to put in double efforts while handling both code writing and testing. It gets harder when they try to incorporate additional or unwanted tools to work out their responsibilities because any extra software or process can hang back productivity. It can be logically proven that moving one task to the other can cause “developer’s block” that eventually kills all the throughput.

Developer testing involves the crucial testing part that must be free of any disruptions in the long run. For this reason, developers must opt for a test management tool that restructures their code writing and testing practices. Even testers can’t just randomly run into a heap of test cases without getting a test management assistance.

For these particular reasons, developer testing workflows must be synced with test and defect management systems.

Test Execution can be a tough part in developer testing and developers mostly run away from it or try as much as possible to avoid it. Manual test execution can be a mad time-consuming factor when the product is wholly developed to achieve the massive customer experience. While repetitive regression testing is another inferno for developers. Therefore, to keep the loop going smoothly and pain-free, QA testers should be on the team to manage automation testing and save some time.

Integrate with CI and Dev tools

In order to maintain software development lifecycle (SDLC), you must fuel developer-owned testing with some powerful CI and Dev tools to help them run end-to-end testing at every test phase and step. With the vigorous integrations, the developer’s drive increases that benefit’s the whole team as well as the company.

So the bottom line is that QA is not only tester’s responsibility, but every team member should own the same agenda!