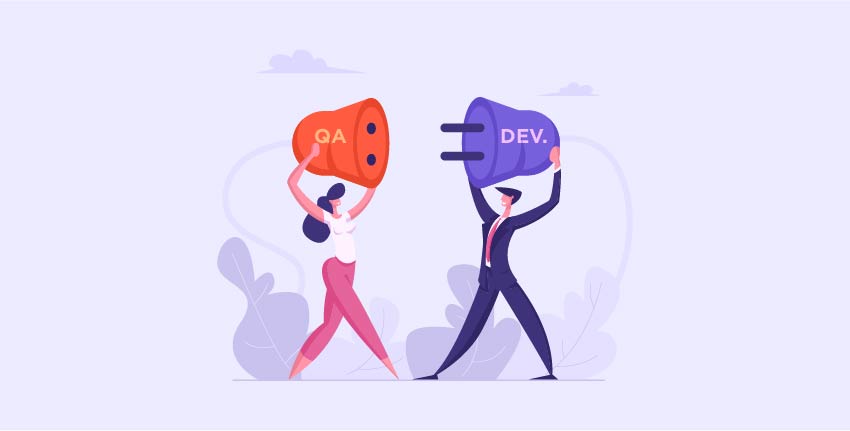 QA engineers understand how possible it is to get irritated when working with developers. These inconveniences are often the product of misaligned priorities: developers are concerned with delivering code, while QA is concerned with quality.

Agile teams will aid in the alignment of QA and developers, but there are still several pitfalls to avoid. There are six main best practices that QA teams can follow to enhance communication with developers, according to industry experts. But first, let’s look at why the two teams are competing in the first place.

The reasons that drive each team are the key difference. Developers are often tasked with writing code that performs a particular purpose. Because of the technical and restricted scope of their work, they can forget how their contribution fits into the larger picture. QA developers, on the other hand, are responsible for bringing a comprehensive, consumer viewpoint to the table through Issue tracking tools, where the output of a particular function is just as good as the overall experience.

For instance, suppose you’re working on a system that keeps track of the number of active users. Because of the algorithm’s design, it returns fractional users—for example, 5.5 active users—which makes little sense from the user’s perspective.

A second scenario can be that a developer recommends requiring users to uninstall items individually in many places. This necessitates the user performing a number of acts that could simply be automated, which has a direct impact on the user experience.

But, let’s be proactive: What should QA do, and what mindset should it adopt, to fully realize the agile growth potential? A variety of ways for testers to strengthen their working relationships with developers are described below.

Concentrate on reliability/quality rather than testing

Testing is nothing more than a means to an end. Often enough, QA engineers run tests as though they’re trying to meet a quota for test completion. We must keep in mind that the ultimate aim is to increase product quality.

Make sure you know what’s valuable to your consumer and put it to the test. Don’t just focus on the concept of a user story. Try to imagine yourself in the shoes of the consumers and ensure that the app makes sense to them.

Always keep your users in mind when testing, and also don’t test just to say you did. Users are more interested in the quality of the software and whether it suits their needs than with the number of tests you performed on it.

Yes, quality assurance is the guardian (of the monsters i.e. bugs), but everyone on the agile team should share responsibility for the product’s quality equally.

You can’t battle every single flaw as a QA tester. Recognize which battles are worth the fight and which you should or can avoid. Or else, everyone will waste a lot of time repairing problems that aren’t important.

Here’s a suggestion: Establish your own “red line” of things you would not compromise on, and concentrate solely on them. For example, you can say that when it comes to loading times and usability of the initial flow of the product, it should be perfect. Now you have chosen this criterion and you’ll stick to it no matter what the case. On the other hand, you can be lenient on other metrics that ‘you think’ won’t really matter in the long run.

Before each version is launched, several teams form a “defects committee,” which pre-defines showstoppers vs. other bugs. This encourages everyone’s efforts to be more focused.

Be optimistic when it comes to defects

There is no way to guarantee that you will have no defects no matter how much testing you do. Perhaps the most stringent testing protocols can never prevent anything from being detected by external users. Keep your cool, learn from these escaped bugs, and enhance your next launch more carefully.

Developers are fond of asking QA engineers, “How did you manage to miss this? You didn’t put it to the test, did you?” The truth is that software becomes increasingly complex, and it is impossible to evaluate every possible scenario and configuration.

As per the time we have, we perform risk-based testing and evaluate the user flows we consider to be the most relevant and general.

We meet with product managers, commercial stakeholders, and even consumers in certain situations. If something gets past our site, we conduct a debriefing to find out exactly what happened and why we overlooked it, as well as creating an automated test to detect escaped defects.

Any team, including agile teams, benefits from visibility because it increases teamwork and confidence. You should not presume that developers or other stakeholders are aware of your activities, testing methods, or standards. With the developer, go through what you’re going to assess.

When you disclose your work with developers, they will begin to focus on the things that are important, upstream. Regular bug-hunt days/events with different stakeholders including but not limited to product management, support, and designers not only broadens the spectrum of testing but also gives the product more eyes to scrutinize.

Publishing key consumer exercises has the added benefit of identifying you as a technical expert who advocates for the end-user.

Skilled QA engineers don’t rely on a magical method to make things run more smoothly. Instead, they take the lead and strengthen communication with their developers, keeping in mind that the user’s experience is the most important factor. Testing is merely a means to a goal, which is quality.

Traceability in Testing and how to Achie...

In a nutshell, traceability is the ability to trace something The methodology is applied in various fields,...