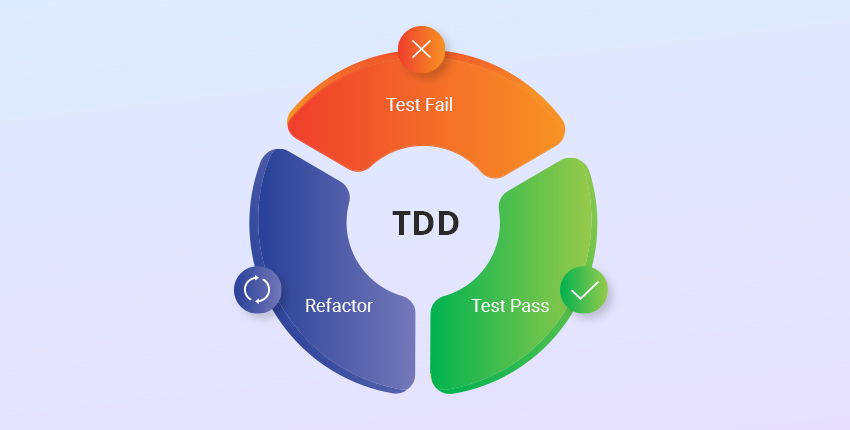 Software testing is a crucial part of a software development lifecycle. When QA teams create a robust software application, it is most likely to detect bugs, issues, and mistakes that teams have made while building the code-base. Test engineers use different types of testing, from unit testing and integration testing to regression testing, to increase their chances to release a high-quality software application. The bitter reality is that software testing sometimes fails to address major issues in an application, thus affecting its quality. Since development teams are struggling with constant pressures to meet tough deadlines and budget constraints, they don’t have time to perform in-depth testing. Albeit using software testing tools to focus on software testing, QA teams follow the concept of ‘Test-Driven Development’ (TDD) reintroduced by Kent Beck.

What is Test-Driven Development?

TDD is a software practice where testers focus on unit testing. It is a highly structured approach to software development that includes the following principles:

TDD is performed in cycles which are usually called red, green, and refactor. This cycle is usuallycycle usually completed once for each unit test that is written. It consists of three stages:

Red – Write a unit test that fails due to missing functionality in an application.

Green – Write code that fixes an issue by making the software pass the test.

Refactor – Clean up the code-base to account for the new code.

Let’s have a look at how development teams can implement TDD:

The first step in TDD is creating a unit test that evaluates a certain part of the code-base. Unit testing is a process that tests the function of a unit. Testers can get inspiration for writing tests during TDD from use case diagrams and user stories.

Use case diagrams: Models for how an application should behave based on the actions that a user wants to perform.

User stories: Brief text descriptions of the requirements stated by the project’s stakeholders.

When QA testers run a unit testing suite, they will receive an error during compilation informing them that a certain case does not exist. This message helps the developers in resolving the issue. In certain cases, errors will appear during runtime. Developers can use statements to verify that a given condition is true while running an application.

During the TDD process, additional tests will be added to the end of the unit testing suite. Each unit test should be an independent entity. No test should depend on the success of the tests that appeared before it.

After developers have completed coding, they need to rerun the testing suite to see if the test can pass. If everything goes well and developers have implemented the principles of TDD, all of the tests are supposed to be passing.

While implementing the TDD approach, this is an optional step. Developers may refactor the code that they wrote in step 3 in order to integrate it with the existing code-base. This makes the code more readable, breaking it into more logical parts, or moving variables and methods.

TDD should continue to expand the features and functionality of the software application.

During TDD, making a new test pass is not an easy task, and breaking the previous tests with the new code the developers have written. In such cases, the best idea is to revert the changes that developers have made, rather than waste time on a lengthy debugging process.

TDD sounds like an excellent idea but it has not been a common practice in a software development process. In a traditional software development model, projects should continue in a series of consecutive, requirements gathering, analysis, design, coding, testing, and deployment. This is known as the waterfall model of software development. This approach generally discourages returning to a previous stage of development. Before testing, all coding and implementation stages need to be completed. However, TDD helps the agile and lean teams to achieve software quality. An agile environment prioritizes flexibility, adaptability, and customer satisfaction with strict rules and regulations. Agile uses iterative development, in which software is constantly released in a new deployable state to get honest customer feedback so that quality can be assured.