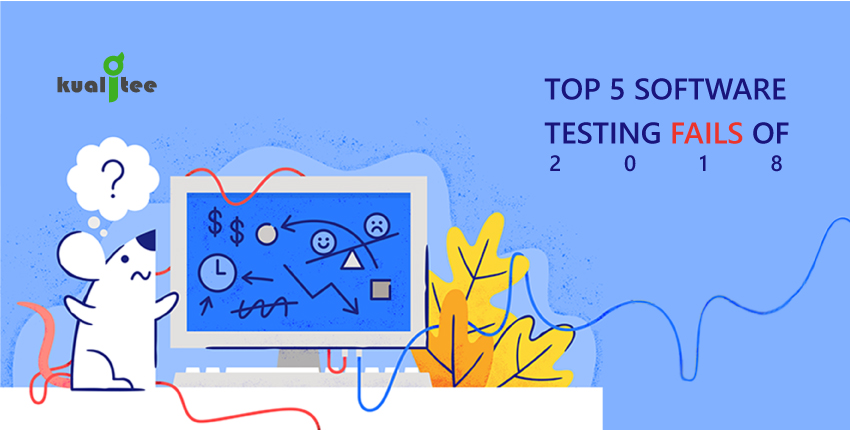 According to an estimate, more than a billion people have been adversely affected by software glitches occurring across different domains and industries. The 2018 Software fail watch report presented an analysis of software vulnerabilities, defects, and failures covered by news organization from around the world. It inspected 606 failures that affected more than 3.6bn people and a loss in revenue of about $1.7 trillion.

Keeping this scenario in mind, we have compiled a list of top five software glitches of 2018.

Hawaii sent out false news to the citizens to take precautionary measures because of an inbound ballistic missile attack. It took 30 minutes before the alert was withdrawn. Investigations detected that the problem was because of human errors. There were design flaws in the Hawaii Emergency Management Agency’s alert beginning software.

The Hawaii Emergency Management Agency was reprimanded for having no visible alterations between their live alert and testing environments. This made it difficult for them to understand the difference between the environment they were using at the moment. Although software bugs are the most popular sorts of fails in the Software Fail Watch, it is unsafe to underrate the harm a badly designed software can cause.

A pedestrian was killed by an Uber car in Arizona on March 21. The victim could not survive due to severe injuries and died in the hospital. Self-driving cars are popularly marketed as a much safer substitute for driving. This because it had the latest sensors and technology to prevent such accidents. In this particular case, the software failed to see the pedestrian, thus the accident occurred.

Intricate independent software like self-driving cars aims to effectively exchange mankind’s requirement to contemplate or take decisions in confident situations. This raises the question: who is responsible is if something goes wrong? In this situation, it is not clear whether the car’s controller or uber should be blamed for the accident. Hence, more legislation is required to be evolved with the evolution of this sort of software.

Security researchers detected a security error that is present in all Intel processing chip created in the past 10 years. The susceptibility makes the possibility for frequently used programs to partly distinguish the content and layout of information saved in protected memory nuts. Companies utilizing the chips in their hardware jumbled to begin reinforcing the susceptibility.

We all know the brand names like BMW, Google, Android, and Apple. The names of the production companies that offer the parts that make up a famous product are unfamiliar. Their software and hardware products are so extensively utilized that a software glitch has worldwide consequences that can take years to be resolved.

4. Google shutting down Google Plus

Recently, Google announced to shut down Google+. It’s a consumer version of its social network. This occurred after they announced that the data of nearly 500,000 users was compromised because of the undetected bug that was present for more than two years. At the same time, the company didn’t mention any evidence of misuse of any sort of data and scope of vulnerability. It has been reported that Google is expected to shut down Google+ consumer version over the next ten months.

Ticketfly provoked an attack that damaged its sporting event and concert ticket website. This caused a total disturbance almost for a week when the website had to be taken down.  Seemingly, the hacker had warned Ticketfly about susceptibility and had asked for a payment to get it fixed. Ultimately, when the company declined the same, the website was stolen and the homepage was swapped with employee and customer data. The data was very sensitive, which encompassed, phone numbers, names and email addresses of as many as 27 million account holders on ticketfly.

Using Kualitee will enable you to get rid of all these glitches. It is a cloud-based test management tool that assists you to achieve enhanced insights on every project. It has a dashboard that provides you with a visual idea on the status of every bug reported in the project.

It helps you to decrease bottlenecks by staying engaged and connected with your team via the app. It also enables you to get notified on any important development in your defects, whether it is assigning, approving or rejecting a defect.