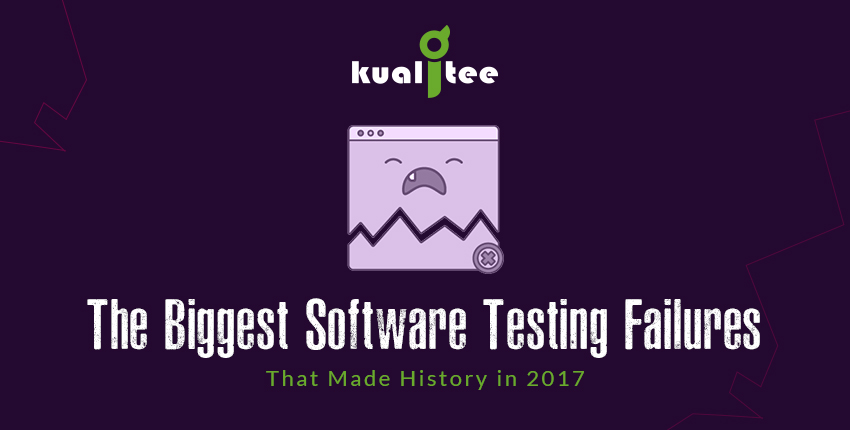 Are you ready to watch a haunting recap of the most devastating software failures that made history in 2017?

We went through the events of the past year to bring forward a list of some of the most notorious events that left people in astonishment and loss to make it worse. This list below will reveal poorly tested and QA overlooked website incidents, not to mention security failures, that led to ground-shaking data loss as well as dismantled company reputation.

You won’t get a better opportunity than this blog to acknowledge the significance of testing and QA because 2017 was extremely drastic in terms of both security and development.

Surprisingly, there were 918 cyber-attacks that affected 1.9 billion data records just in the first half of the current year, according to Gemalto (CNBC).

Let’s discuss some out of the huge list of information security failures:

Experts have declared it as the most devastating ransomware attack yet.

As per Mikko Hypponen, Chief Research Officer at the Helsinki-based cybersecurity company F-Secure labelled the attack as “the biggest ransomware outbreak in history.”

WannaCry was a ruthless ransomware that attacked the UK’s NHS trust and lead to the cancelation of pre-scheduled operations and appointments. Besides, ambulances were diverted, affecting many people.

The cruel information security attack crippled almost 40 medical trusts and in return, the hackers asked for medical records of the patients.

When investigated it was found that obsolete security system and Microsoft’s vulnerable software codes that provided the hackers a welcoming treat.

This tech-advancing era requires some rigorous testing and monitoring techniques.

GoT Fans Did Not Have to Wait Much!

The Game of Thrones’ fans did not have to wait much. Shockingly, the series was already hacked by cyber information stealers before they could get released on the official date. It was a bounty for GoT fans, though hell for HBO!

Alarmingly, the hackers stole 1.5 terabytes data alongside the GoT new episodes and other official data as well.

As a tester, you might not find any better and worst example of failed performance testing!

Equifax, one of the biggest US-based credit rating firm that gathers information from 820 million consumers and 91 million enterprises faced a “massive” task responding to the hack. In September 2017, the information saving reserve made a surprising announcement that it could not save the information of its 14.5 million customers. These users were mainly from the UK, US, and Canada.

Furthermore, Equifax called other 700,00 users and told them about the risk susceptible to their private credentials.

The hackers stole the private information like names and date of births of the users.

Do you see how badly a huge enterprise can fall apart without integrating the right testing practices?

Apple’s most anticipated Face ID that was introduced as a future substitute for its Touch ID failed at its launching event and left everyone in shock. Apple’s software chief Craig Federighi was in great embarrassment when he came on the stage to showcase the latest iPhone X feature but failed the attempt. The trial shot passed on another iPhone, though, it was too late to satiate the viewers at the spur of the moment.

Later, Apple explained what actually happened while staging the Face ID at the event.  This is a perfect example of a failed functional testing.

Yes, Bitcoin, the most emerging technology too became a victim of information attacks. Back in April, Bitcoin Unlimited 600 nodes crashed down due to a memory leak. It is almost 70% of the nodes run by the BU at a specific time.

It was first reported by a BU operator who observed the memory leak.

The glitch was fixed immediately but it caused enough damage to the user’s information and it was not for the first time.

Blockchain testing can help secure the digital currency that’s quickly gaining popularity worldwide. But it will take time for testers to harness their skills in this area as it is a newfound field.

Shaken up much? Well, you should be because these security testing failures can be considered as the biggest testing mistakes ever made.

Product and services will continue to evolve maybe at a much quicker pace, but their security will always hold the highest priority. If you as a tester want to protect your company from any unpleasant incident, then it is crucial for you to follow the latest testing strategies and techniques as well.

Also Read: Best Test Management Tools That Must Be Used For 2019