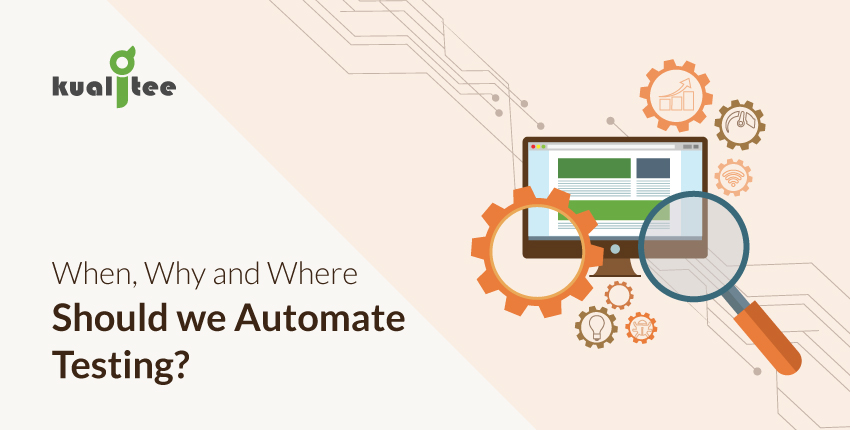 Being a Software Tester, you would go through a very alike situation every day: “When, Why, and Why Should We Automate Testing?”

Questions arise as testing in automation has many risky grounds to look before beginning a software development lifecycle such as:

–     Is your programming knowledge enough for that particular automation related project?

–     Automating with the unfixed UI is okay?

–     Beginning testing in the early stages of SDLC would be fine?

–     Are you thinking of 100% automate the project? No, you can’t since other testing practices have to be done too.

–     Did you miss out on test cases that need a single run?

–     Is that test case going to help you out in the future? Will it provide the longtime help?

We have answers to all of your questions (most of them).

Let’s figure out the when and why dilemmas of Automation Testing:

When to Automate Testing?

It is risky to decide when to automate your testing and when not, well, yes, there are plenty of things to consider like cost, UI, creating a backlog for future help, repeating unimportant test cases, etc.

Let’s suppose, there is a specific product that you have already done all the regression and functional testing to make it totally bug-free. Meanwhile, new fixes or bugs arise in the product, how would you fix them in a very strict timeframe and budget? Prepare yourself because adding that particular change is greatly going to consume your manual effort and cost you bigger. Essentially, the regression needs automation testing to reduce human error index.

Though it might be too late to realize, this is where you need automation testing. Test automation is a perfect process that assures continuous integration and delivery of new improvements and releases in the test project. It saves the executors and testers from spending huge costs and burning extra minutes.

Why and How you should Automate Testing?

Why should you consider automation over manual testing? Why should it be a super-priority in Agile environments? How will it benefit the testing project? These why’s and how’s are often perplexing and put testers in a serious dilemma.

You can’t manually test every new release or bug since it is expensive and time-consuming. This is why the test automation procedure is mandatory in this framework, let’s discuss how:

We hope the mentioned-below facts might clear some of your glitches:

After the software has been developed, the test has to be repeated to ensure the highest quality of the product. Every change in source code requires scrutiny every time to maintain the testing stability. Every time following a new test release, testers test its compatibility with multiple operating systems, platforms, and interfaces as well as the hardware algorithms to assure the product’s functionality.

While in manually testing, each new change, release, or repetitively testing can require cost and time. While automation testing includes CI and pre-scripting that requires only the initial expenses.

Other than that, the tested test cases can be reused several times in the future that is clearly an advantage that can’t be found in manual testing. Consider this, if manual testing is taking days, testing in automation will consume just a couple of hours only!

Manual Testing can require different strategies to test different bugs and releases. However, in automation the same methodology is followed and implemented for making any repetitive changes. The testing harmony greatly benefits the software system and its accuracy.

Making sure every test step is checked and covered is quite a problem in software testing. Typically, manual testing skips some important test steps that often contain unobserved bugs. But automation testing performs quality assurance methods for every test step and organizes test cases in a particular way, no matter if they are thousands in number.

Automation testing is all about experimenting and brainstorming that keeps testers motivated and logically awake, while in manual testing they feel the tester’s block very often. An increased tester’s morale is productive for the whole company and its reputation.

The automation testing processes are flexible enough to integrate with a highly complicated application or third-party repositories.

So, next time whenever you hit on these dilemmas, you will get these answers popping right quickly!

« How to Create a Winning Testing Strategy?
Automation Testing in an Agile World »
SHOW YOUR LOVE

One thought on “When, Why and How Should We Automate Testing?”