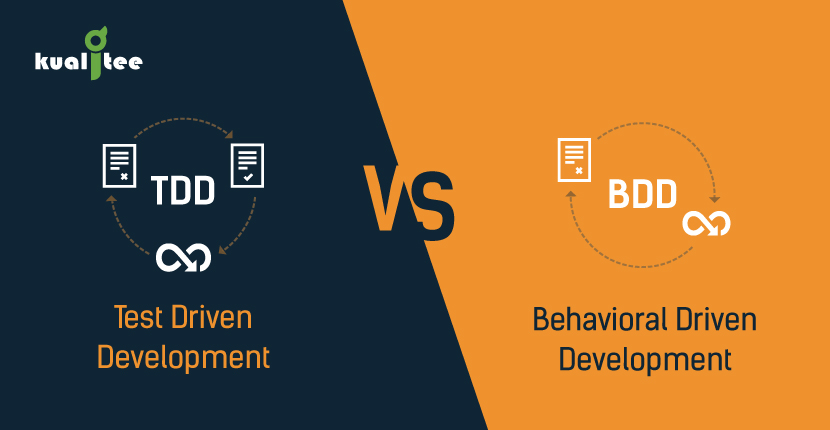 So, without further ado, let’s get down to study:

Test Driven Development, as the name suggests, is driven and run by a series of automated unit test cases to extract out the peak functional aspect of a specific feature. These tests fail naturally because developers write unit tests when the functional codes are unwritten. TDD is mostly used in agile workflows as it supports the product shipment at the end of test sprint.

Following are the important process components of TDD:

Nat Pryce and Steve Freeman’s book “Growing Object-Oriented Software, Guided by Tests” has a classic TDD cycle that explains the TDD loop as:

Write a failing test → Pass the test → Refactor and the cycle continues.

TDD tests the code’s ability to accept a given data and the probability of recovering it via refactor approach. But intrinsic computations may nullify any wide-reaching changes in the automated test cases and cost both money and time to the whole software development team.

TDD is actually BDD done right. It can be referred to as a better implementation of TDD with more useful guidelines. It helps in defining user behavior through expert conversations, choosing particular tools and testing types. In fact, BDD is based on theory rather than being a running process. Putting it simply, BDD is expected to remove any glitches and problems associated with the TDD process.

It is communicated and programmed in an agile workflow where:

BDD can be driven and run by various CI tools such as Cucumber, Docker, PowerTools, FitNesse, etc. The test scripts and functional codes are written in simple English in Gherkin, Wikis etc.

Since the behavior-driven specifications are written in English, it puts all the stakeholders and the IT team on the same shared ground that lessens the chances of any fallacies and risks. BDD greatly helps in achieving the well-thought and actually experimented user-behavior.

TDD vs. BDD helped us realize that test-driven development is itself confusing. Because how can you test something that isn’t complete or built yet. Testing can’t be done on assumptions merely, while there are many other reasons to hail BDD:

Acceptance and communication get easier with BDD, while TDD is dispersed and complicates team association. The comparison suggests that writing vague test cases is useless without specifying the user’s behavior towards a specific product.

Therefore, it’s more important to hang a hat on user-defined behavior which is only possible with the Business-Driven Development process.

« Level Up Your Testing with Kualitee & JIRA’s Enhanced Integration
Tester’s Diary: Adventures of a Tester in a Development World »
SHOW YOUR LOVE

How to Help You Boost Your QA Career in ...

When we read through the job listings for QA and test professionals, we see a long list of technical...