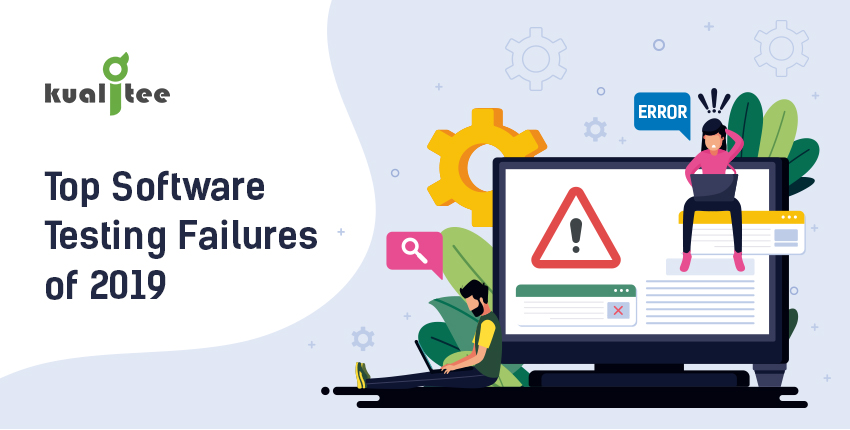 In the modern age, technology is something we cannot imagine our lives without; It has changed everything around us, making us more dependent on it. No matter how technology evolves, the need for software testing has become indispensable. We hear stories of new software failures across a myriad of industries, causing havoc, resulting in financial losses and even costing lives. Recently, the most significant software failures include ransomware attacks, IT outages, etc. that affected millions of customers and companies around the world. As the examples of recent unfortunate events revealed below, a major software bug can result in critical situations causing chaos and halting business operations.

We have gone through this year’s event to list down a few of the most critical events that have damaged company reputation. The list below highlights poorly tested websites and systems that led to the worst accidents. These incidents throw light on the importance of using software testing tools in the software development process.

Let’s take a look at what went wrong during some of the worst software failures in 2019:

Israel’s Attempt to Land on Moon Fails Seconds Before Touchdown

On April 11, 2019, Israel’s first lunar lander Beresheet crash-landed on the Moon. SpaceIL launched its first spacecraft that was scheduled to touch down on the lunar surface, but moments before landing, it failed. In the final few minutes of its descent, the Beresheet’s engine stopped. The engine firing was supposed to decrease Beresheet’s speed from 3700 miles per hour (6000 Km/hr) to zero, but when the spacecraft was about 4 miles (7 km) from the surface, it stopped firing. The mission control got the engine back online but failed to regain communication with the spacecraft, which caused the lander to crash into the surface. It is most likely that the shuttle came in too fast and created a new crater on the surface – something that testing teams failed to identify while testing the spacecraft’s software.

The US aircraft manufacturer Boeing launched one of its newest models, 737 Max, and its commercial flight crashed off the coast of Indonesia in October 2018. A few months after working on its software, another Max crash-landed in Ethiopia in March 2019. Investigators of the crashes said that they believed that a major software failure played a role in both crashes. 737 Max was grounded with 346 people dead in this accident, raising questions for aviation around the globe as to what went wrong.

The plane’s flight computer tried to push the aircraft’s nose down repeatedly, and pilots could not get a hold of it even by activating the stabilizers. Investigators and FAA pilots have identified that this didn’t occur as a result of a hardware fault. The fault triggered due to erroneous flight data. The expectation is that a new software patch will be devised that monitors the flight’s computer for unusual conditions and prevents movement of the stabilizer when a similar situation occurs.

On August 7, 2019, British Airways passengers were left stranded because of more than 100 canceled flights. These cancellations affected thousands of travelers using Heathrow and Gatwick airports in the UK. Owned by International Airlines Group (ICAGY), British Airways claimed that a major flaw in software had caused their systems to go offline. It is not the first time in history that the airline suffered a computer crash. Spokespersons for the airline stated they were working to resolve the ‘technical issue’ affecting inbound long-haul flights and that the canceled flights would be rebooked between August 8 and 13, with hotel accommodation for those unable to continue their journeys. BA has suffered a significant loss due to these cancellations, and it’s IT experts are still working on improving the computer systems.

All these incidents can be disappointing for organizations that invest finances and resources in speeding up their game in the digital age. These challenges seem to intensify as more and more enterprises embrace digital platforms for better performance and growth. While speaking of testing practices, software testing tools are being increasingly deployed to improve software quality to decrease the number of software failures. These tools enable businesses to make their applications and software smooth and market-ready.

« Software Testing Tools: Out with the Old, In with the Bold
Are Defects a Blessing in Disguise? »
SHOW YOUR LOVE